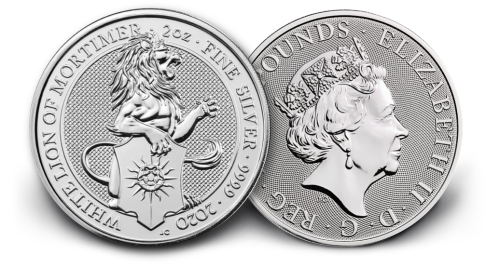 In 2016, the Queen’s Beasts Series was born. Since then, two coins have been released each year. This highly sought after .9999 pure silver coin shows the White Lion of Mortimer, who descends to the Queen through Edward IV. He is holding a shield that has two distinct badges -- a white rose that is encircled by a golden sun. These icons appear on the Great Seals of Edward IV and Richard III, and were used by George VI when Duke of York. This heraldic beast is uncrowned, but no doubt, he’ll be a crowning piece to your royal collection.