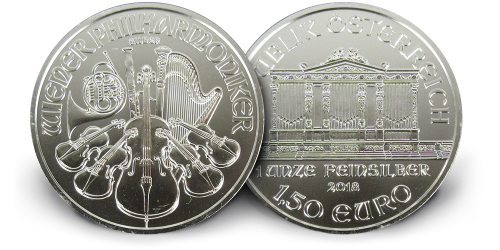 May be spotted. The Vienna Philharmonic silver coin issued to commemorate Austria’s tradition of fine music, was minted beginning in 2008 after great response to the original gold Vienna Philharmonic. Etched from 99.9% fine silver, the Vienna Philharmonic is considered to be one of the most beautiful silver bullion coins in existence. The coin’s obverse features a collection of musical instruments representing those played by the members. The reverse depicts the great organ of the Golden Hall, home to the Vienna Philharmonic Orchestra. These coins were originally struck solely for their bullion value, however there has been increased interest in the numismatic community as collectors find the design stunning, and the commemoration behind this coin to be something of value to their collection, beyond the bullion.